CTC Group Medium-Term Management Plan (2021 to 2023)
Beyond the Horizons: To the Future Ahead

Society today is facing many issues, including the climate change, widening social disparities, and in Japan a declining birthrate and aging population. While IT is evolving rapidly to address social issues, new challenges, including the need to bridge the digital divide, have begun to emerge.

Recognizing these circumstances, CTC has redefined its materialities to fulfill its social responsibilities and grow further as a company under its mission of "Leveraging IT's potential to change future for the Global Good." Based on these new materialities, CTC has developed a medium-term management plan as a three-year plan.

The Company has identified materialities with the following three as the pillars, with an eye on achieving a sustainable society through its business:

The medium-term management plan is aimed at achieving growth of the overall CTC Group toward FY2023 under the three basic policies described with keywords of Accelerate, which is based mainly on support for DX and expansion of the co-creation business, Expand, which is aimed at expanding the 5G and cloud businesses, and Upgrade, which reflects an intention to develop human resources and reinforce the management base. 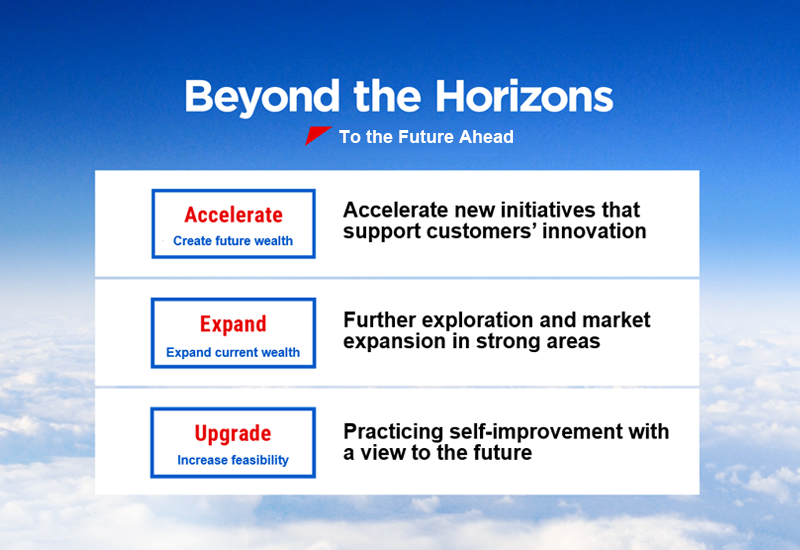 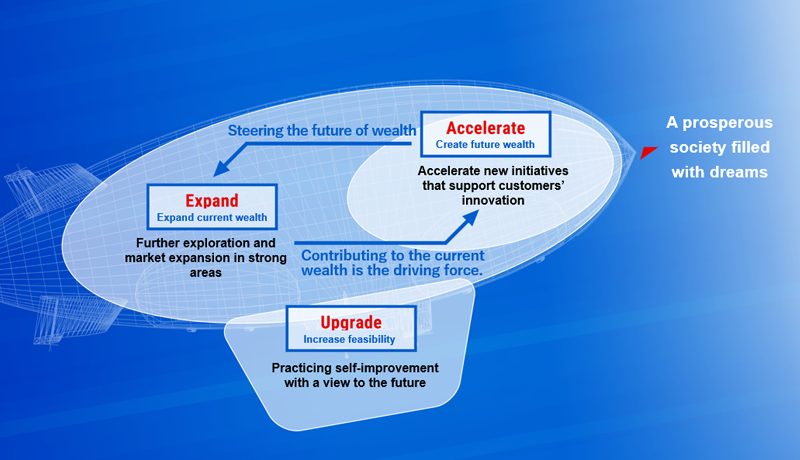 Create new value with initiatives such as DX for customers' operations and businesses, expansion of community formation and the co-creation business, and the provision of high-value added services and state-of-the-art technologies. 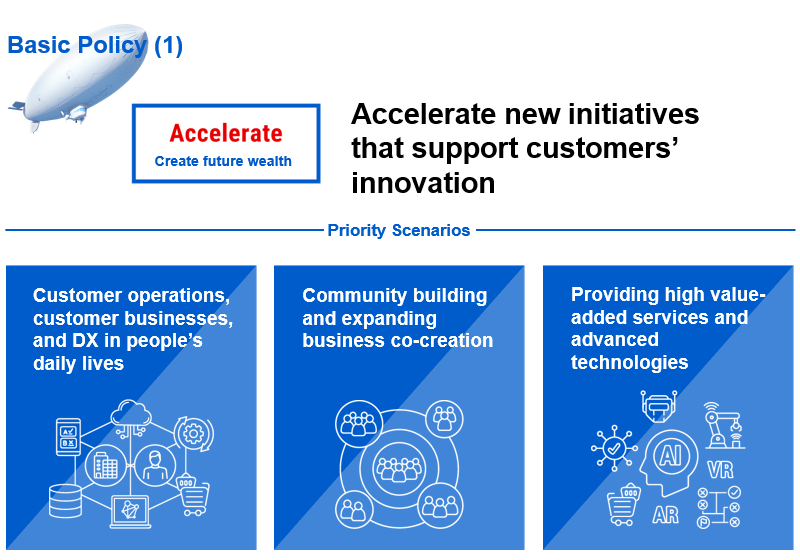 Increase and stabilize revenues by expanding the 5G business, strengthening the XaaS business, and adding to the CTC Group's strengths by introducing the business models employed in Japan globally. 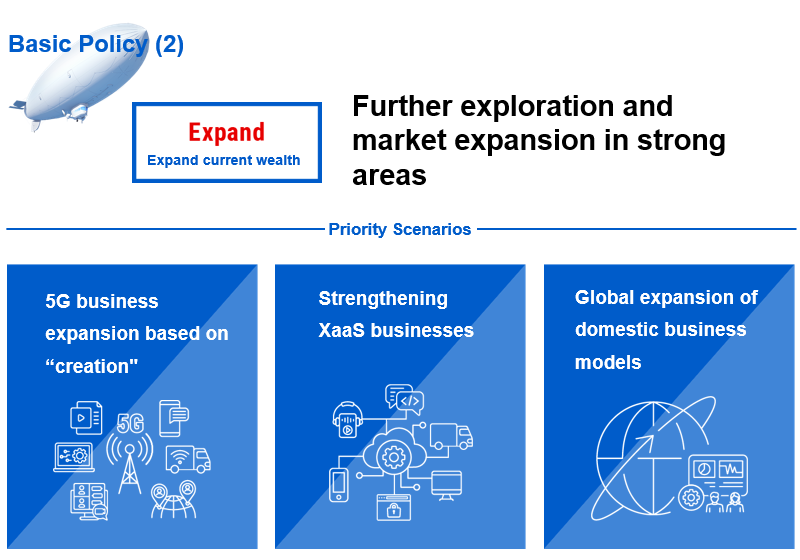 3. Upgrade: Increase feasibility
Practicing self-improvement with a view to the future

Increase the feasibility of the Accelerate and Expand policies with initiatives that include improving the comprehensive strength achieved by combining the growth of individuals with allocation of the right people in the right places, transformation of the management base for adapting to changing environments, and harmonious co-existence with diverse stakeholders. 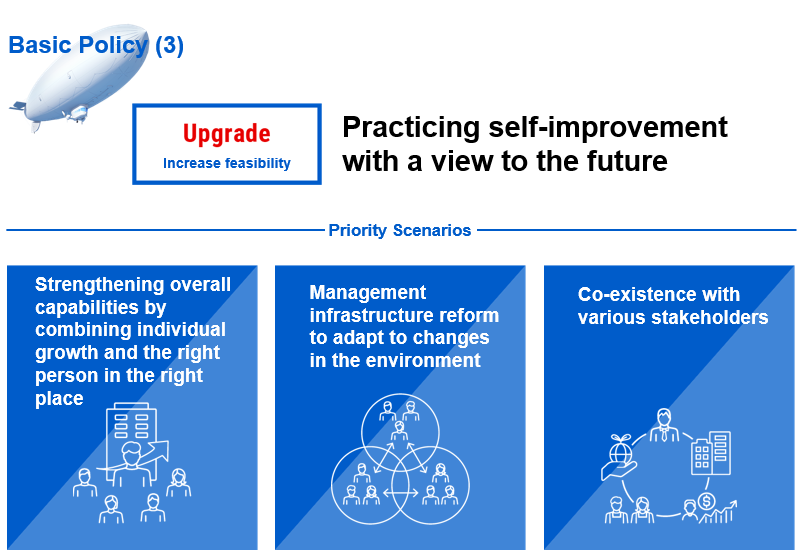 One story which unites the corporate philosophy, materiality, and the Medium-Term Management Plan

Although the target period is different, 10 years for materiality and 3 years for the Medium-Term Management Plan, they are both aimed at the same direction as the corporate philosophy, which is the purpose and significance of the CTC Group's permanent existence as a member of society. 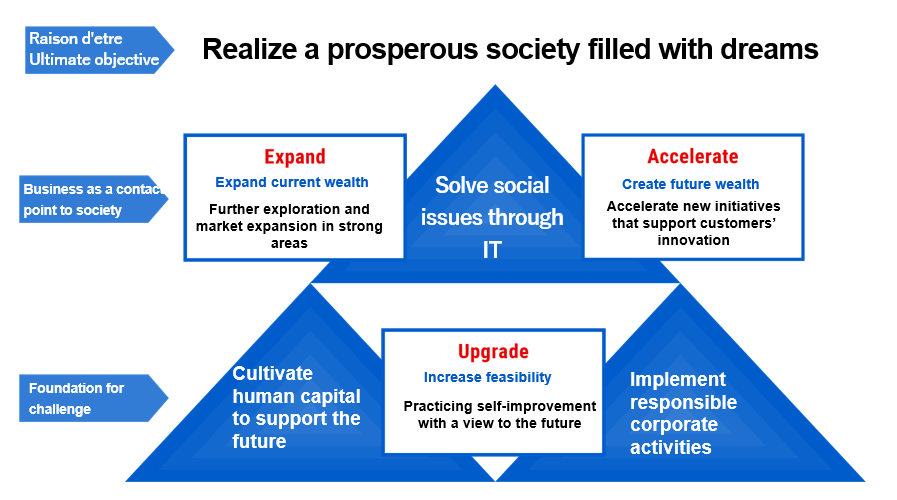 Expand the scope of value for customers and society, and aim to further improve profitability and capital efficiency.